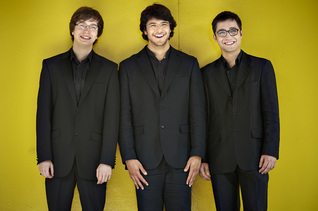 
A ravishing programme from this highly regarded trio,    who are part of the prestigious Young Classical Artists Trust scheme for outstanding young musicians poised for major careers on the world stage.

The Trio Isimsiz was formed in 2009 at the Guildhall School of Music & Drama, under the guidance of Louise Hopkins, Carole Presland, and Alasdair Tait.  They have undertaken residencies at the Banff Centre, Canada and Mozarteum, Salzburg, and participated in masterclasses with Andras Schiff, Steven Isserlis, Menahem Pressler, Thomas Riebl, Wolfgang Reddick, the Gould Piano Trio and Takács Quartet. In 2015 the Trio attended IMS Prussia Cove working with Ference Rados.

Following a successful residency in Aldeburgh earlier this year, the Trio return for a recital in the Britten Weekend and a further residency in 2016.  They give recitals at Wigmore Hall, the Fundacion Juan March in Madrid and throughout the UK. Further afield they make their debut in New York.

All three members of the Trio Isimsiz Piano Trio enjoy great success individually.  Erdem Misirlioglu was a Concerto Finalist in the BBC Young Musician Competition in 2008, Pablo Hernán Benedí is a member of the Chiaroscuro Quartet, formed by Alina Ibragimova, and Michael Petrov represented the UK in the European Concert Halls Organisation Rising Star series during the 2014/15 season.
Haddington Concert Society