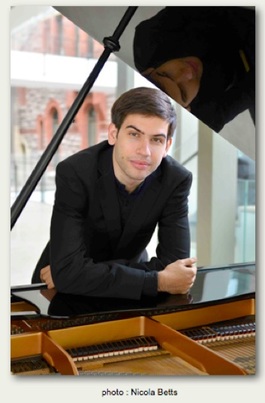 It was Alasdair Beatson who first drew our attention to this remarkable young Swiss pianist, whose performances at Alasdair's Musique à Marsac chamber music festival last year demonstrated what a sensitive, intelligent, and extremely musical artist Jean-Selim is. He went from there to a fellowship at Toronto's Glenn Gould School of Music and a year of music-making in Canada. As the winner of the Guildhall Wigmore Recital Prize, he made his Wigmore Hall solo debut in June this year. Jean-Sélim was invited by Andras Schiff to participate in his Summer Academy at the Gstaad Menuhin Festival this July, and also to give solo recitals in Frankfurt, Zurich, New York, and Berlin as part of Schiff's Building Bridges concert series. Jean-Selim comes to us directly from two of those recitals. His programme includes works by Bach, Debussy, Chopin, and Schubert as well as one of his own compositions. In short, we expect a memorable recital.