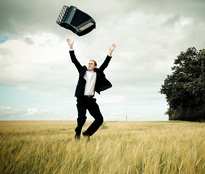 "Chamberlain's remarkable technique and the scope of his instrument
shine throughout." Musicians' Union Magazine

A cornucopia of delights from this rising young Scottish star, in whose hands the classical accordion displays all the colour of an orchestra.
PAUL CHAMBERLAIN  graduated from the Royal Conservatoire of Scotland in 2013 with a Masters in Performance. In 2010  he won the acclaimed Governors Recital Prize for Keyboard, with a subsequent live performance broadcast on BBC Radio Scotland’s “Classics Unwrapped” programme. He was also one of the keyboard section finalists in the 2011 Royal Overseas League competition.

He is a highly accomplished player and with appearances at international music festivals such as Baltica Harmonica in St. Petersburg, Russia, and Sata-Häme Soi Accordion festival in Ikaalinen, Finland, he has also performed in France, Italy, Greece, Bahrain and the USA.

In 2011, Paul released his debut solo album entitled “Classical Accordion” featuring a mixture of transcriptions of works by J.S. Bach, Rameau, Moszkowski and Khachaturian, as well as original works by Alexander Nagayev and Franck Angelis.

He made his Bridgewater Hall debut in February 2013 with a solo recital as part of the long established Manchester Mid-Days concert series.