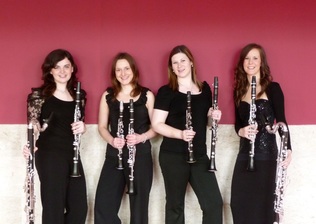 The photograph includes Nicola Turner, who is on maternity leave. She will be replaced by Janet Laird.

The critically acclaimed Cameo Clarinet Quartet have been entertaining audiences with their varied programming, versatility and harmonious sound since their formation in early 2011. They have performed all over Scotland, most recently during the Edinburgh International Festival, and have been involved in numerous collaborations with the new music group ‘Edit Point’ and talented composers Tim Cooper and Marcus Blunt (Honorary composer-in-residence for Dumfries Music Club). Projects have culminated in a number of commissions, world premieres and appearances at Glasgow’s City Halls and the Royal Overseas League House.

Passionate about music education, she has been involved in projects run by the LSO, SCO Connect, Scottish Ballet In and Out, Music in Hospitals and Music Mites (Milton Keynes). She has also coached woodwind for the West of Scotland Schools Concert Band (WSSCB), the Advanced Chamber Music Course at Benslow (Hitchin), Bach to Baccus (Trittenheim, Germany) and enjoyed a wonderful four year post as Chamber Music Coach and Assistant Conductor with the Palace Band (London). Rebecca currently teaches clarinet and coaches chamber music at the Junior Royal Conservatoire of Scotland, teaches woodwind for the East Dunbartonshire and Inverclyde Schools Instrumental Music Services, and conducts the East Dunbartonshire Schools Wind Band.

Lesley Bell grew up in Fife and was a pupil at the Junior Academy of Music in Glasgow. After two years at Napier University in Edinburgh she transferred to the BA Music course at the RSAMD where she graduated with a First Class Honours in 2003.

Lesley now combines teaching at Aberdeen City Music School and St. George’s School for Girls in Edinburgh with a freelance career. She has performed with the BBC Scottish Symphony Orchestra, the Royal Scottish National Orchestra and the Scottish Chamber Orchestra. She performs in the Ebony Duo with the pianist Fiona Macleod, and is also a musician in the Highland Band of the Royal Regiment of Scotland and has performed with them in France, Luxembourg, Nova Scotia and Romania.

Fife-born Jenny Stephenson is a graduate of the Royal Scottish Academy of Music and Drama and the Marseille at the Conservatoire à Rayonnement Région de Marseille where she specialised in contemporary music. Jenny has performed with The BBC Scottish Symphony Orchestra, The Royal Scottish National Orchestra and the Orchestra of Scottish Ballet. Her solo performances include Mozart’s Sinfonia Concertante, The Copland Clarinet Concerto and the Artie Shaw Concerto for Clarinet. Jenny is also an active chamber musician and as well as performing regularly with the Arunda Reed and Beresford Trios as well as playing for the ‘Music in Hospitals’ scheme, Scotland.

An actor/musician with children’s theatre company Very Victorian Tales, she has appeared as Lady Chisholme in “The Little Girl Who Loved Stars” and Miss Critch in “Henry the Litter Bug Worm” in venues throughout Scotland. As an educator Jenny is currently part of the teaching staff for No Strings Attached, a charity committed to providing opportunities for young people with asthma. Jenny has led Youth Music Initiative workshops for the Fèis Rois and taught at both the RSAMD Junior Academy and RSAMD Musicworks.

Janet Laird is from Wishaw in North Lanarkshire and started playing clarinet at the age of thirteen. She studied clarinet at Napier University with Alison Waller and then at the Royal Scottish Academy of Music and Drama with John Cushing gaining a first class honours degree. She continued her studies in Italy with Fabrizio Meloni, principal clarinet in the orchestra of La Scala Milano with the help of scholarships from the Caird Travelling Scholarship Trust, Scottish Amicable and the Scottish Arts Council.