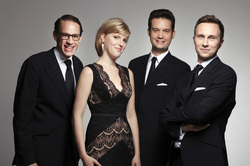 The Doric String Quartet has received glowing responses from audiences and critics across the globe for “performances of terrific panache and perception” (Sunday Telegraph) and a string of award-winning CDs.
DORIC STRING QUARTET

Described by Gramophone Magazine as ‘one of the finest young string quartets’,  the Doric String Quartet has received glowing responses from audiences and critics across the globe. Amongst its numerous awards include 1st prize at the 2008 Osaka International Chamber Music Competition in Japan, 2nd prize at the Premio Paolo Borciani International String Quartet Competition in Italy and the Ensemble Prize at the Festspiele Mecklenburg-Vorpommern in Germany. The Quartet was represented by Young Concert Artists Trust (YCAT) from 2006-2010.

Since its formation in 1998 the Quartet has performed across the world and collaborated with artists including Ian Bostridge, Philip Langridge, Mark Padmore, Alexander Melnikov, Piers Lane, Kathryn Stott, Chen Halevi and the Florestan Trio. In autumn 2010 the Quartet made its highly acclaimed American debut with recitals at the Frick Museum in New York and Library of Congress in Washington. Other recent highlights include recitals at the Berlin Konzerthaus, Amsterdam Concertgebouw, Vienna Konzerthaus, Hamburg Laeiszhalle and in Brussels, Frankfurt, Lucerne, Milan, Moscow and Paris. In addition to their regular appearances at the Festspiele Mecklenburg-Vorpommern the Quartet has performed at the Carinthischer Sommer, Delft, Incontri inTerra di Siena, East Neuk, Isle of Man, I Soloisti del Vento and Schwetzinger Festivals. Further afield they have toured to Japan, Israel, Australia and New Zealand. Highlights of the 2012/13 season include returns to the Berlin Konzerthaus and Amsterdam Concertgebouw, as well as recitals at the Stockholm Konzerthaus and in Prague, Denmark, Norway, Poland and Israel. The Quartet will undertake its third US tour in November with concerts in Washington DC, New York State and Pennsylvania and returns later in the season for three concerts at the Vancouver Recital Society. UK engagements include three performances at Wigmore Hall and a celebration of the 10th anniversary of its residency at the Wiltshire Music Centre.

In 2009 the Doric String Quartet’s first CD was released to critical acclaim on the Wigmore Live label and was chosen as Editor’s Choice in Gramophone “The Doric’s Haydn sparkles with wit on their impressive [and] very auspicious recording debut”. Since 2010 the Quartet has recorded exclusively for Chandos Records. The first CD, the complete Korngold String Quartets, was released in September 2010 and featured as one of the 2010 Critic’s Choice discs in Gramophone, followed by string quartets by Walton in spring 2011 which was similarly enthusiastically received by the press and nominated for a 2011 Gramophone Award. The Quartet’s most recent release, of the Schumann String Quartets, was named as CD of the Month in Gramophone and BBC Music Magazine and was shortlisted for a 2012 Gramophone Award The Quartet’s next release will be Schubert’s ‘Rosamunde’ and ‘Death and the Maiden’ quartets (September 12). Other future releases will include works by Chausson, Brett Dean, Bartók and Haydn.

Formed in 1998 at Pro Corda, The National School for Young Chamber Music Players, from 2002 the Doric String Quartet studied on the Paris-based ProQuartet Professional Training Program, where they worked with members of the Alban Berg, Artemis, Hagen and LaSalle Quartets and with György Kurtag. For many years the Quartet worked with Rainer Schmidt (Hagen Quartet) at the Music Academy in Basel.