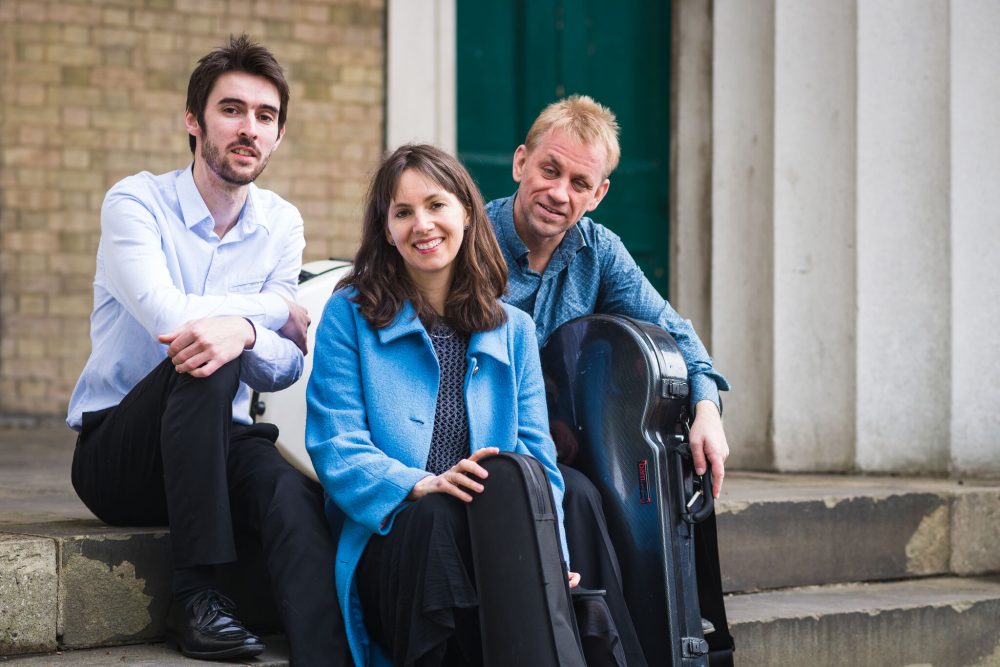 The Joachim String Trio was formed in early 2016 to explore the rich store of repertoire for violin, viola, and cello, primarily from the Classical and Romantic periods, but also embracing music from the Baroque and the twentieth century. The Trio performs with gut strings and historical bows. This lends the music an immediacy, expressivity and textural subtlety which has led the Trio to a uniquely explorative and stimulating approach to the music. The number of fine works for the string trio is surprisingly large and deserves for more exploration than it currently enjoys, a situation the Joachim String Trio has committed to remedy.

Sara Trickey violin
Sara Trickey brings her "beautifully refined tone" (Musical Opinion) and her "fiery and passionate" performance style (The Strad) to her award-winning career as both solo violinist and chamber musician. She is a founder member of the Joachim String Trio and also performs regularly with the Odysseus Piano Trio and was leader of the Bronte String Quartet for six years. Sara has performed extensively as a concerto soloist, including with the City of London Sinfonia and the Orchestra of St Johns. She has a regular duo partnership with pianist Dan Tong, with whom she has made an acclaimed CD of Schubert Sonatinas. Her discography also includes a world premiere recording of William Mathias violin sonatas, while her next recording project encompasses the music of Fauré and David Matthews. Sara plays regularly at festivals across the country, most recently at the Oxford May Music Festival, the Wye Valley Festival and the Rye Music Festival.

Tom Hankey viola
Tom Hankey studied the violin with David Takeno, Krzysztof Śmietana, Levon Chilingirian and Yossi Zivoni at the Purcell School, the Junior Guildhall School of Music and Drama and the Royal College of Music. As a violinist and violist he is a member of the Aronowitz Ensemble and plays second violin in the Callino Quartet, touring extensively with them and recording works by Haydn, Schubert and Janáček. As a soloist Tom has given recitals and concerto performances including Beethoven’s Triple Concerto, Prokofiev’s First Violin Concerto, concertos by Bach and Vivaldi, and Stravinsky’s The Soldier's Tale. Tom has collaborated with musicians from varied genres; most recently touring India with Sarod player AmJad Ali Kahn and a West Coast of Scotland tour with a string trio and tabla player Kuljit Bhamra.

Philip Higham cello
One of the most prominent young cellists from the UK, Philip Higham, already well-known to Haddington audiences, has appeared as a soloist with the Northern Sinfonia and Philharmonia, Hallé and Bournemouth Symphony Orchestras. He has given recitals at Wigmore Hall, St John’s, Smith Square, the Aldeburgh, Brighton, City of London, Gower and Lichfield Festivals, as well as further afield in Germany and Istanbul, and at the Phillips Collection in Washington. In 2013 Delphian Records released Philip’s debut recording of the Britten Solo Cello Suites to critical acclaim, winning the title of ‘Instrumental disc of the month’ in The Gramophone and ‘Instrumental Choice’ in BBC Music Magazine, being lauded as ‘A 5- star performance’. Born in Edinburgh, Philip studied at the Royal Northern College of Music with Emma Ferrand and Ralph Kirshbaum, winning top prizes at major international competitions such as the 2008 Bach Leipzig, 2009 Lutosławski and the 2010 Feuermann Competitions. Philip plays a Tecchler cello of c1730.